The Alaska Interior covers most of the U.S. state's territory. It is largely wilderness. Mountains include Mount McKinley (Denali) in the Alaska Range, the Wrangell Mountains, and the Ray Mountains.

The largest city in the interior is Fairbanks, which is Alaska's second-largest city. Other towns include North Pole, Eagle, Tok, Glennallen, Delta Junction, Nenana, Anderson, Healy and Cantwell. 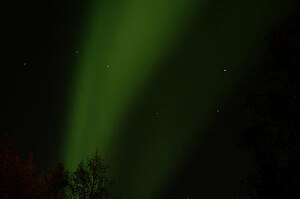 Temperatures in Interior Alaska change a lot between the seasons. Winter temperatures in Fairbanks are usually around −12 °F (−24 °C) and summer temperatures are around 62 °F (17 °C). Temperatures there can get as low as −65 °F (−54 °C) in mid-winter, and as high as 99 °F (37 °C) in summer. Both the highest and lowest temperature records for the state were set in the Interior, with 100 °F (38 °C) in Fort Yukon and −80 °F (−64 °C) in Prospect Creek.[1] Temperatures within a given winter can ghange a lot also. Long cold snaps can be followed by sudden warmth with temperatures above freezing. this is because of changes in the wind.

Summers can be warm and dry for a long time. This can make it easy for wildfires to start. Weak thunderstorms can produce lightning that starts a fire. These fires are often left to burn if they are far away from where people live. The 2004 season had the most fires. Over 6,600,000 acres (27,000 km2) were burned.

The average annual precipitation in Fairbanks is 11.3 inches (28.7 cm). Most of this is snow during the winter. Most storms in the interior of Alaska originate in the Gulf of Alaska. Most of these storms are blocked or weakened by passing over the mountains.

The months from May to July in the summer have no darkness at night. They only have a twilight during the night hours. The months of November to January are the other way around. They have little daylight. It is light for about 21 hours every day between May 10 and August 2. It is light less than four hours each day between November 18 and January 24. On clear winter nights, the aurora borealis, or "Northern lights" can often be seen dancing in the sky. A lot of the ground in the Interior has permafrost, meaning that there is a layer of soil that is always frozen.