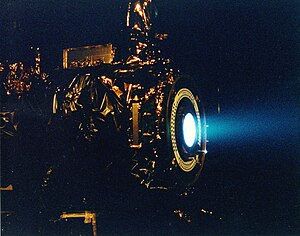 An ion thruster is a kind of spacecraft engine. It works by using static electricity or magnetism to push ions (electrically charged atoms) out the back of the spacecraft. It takes a very long time to speed up, but its fuel lasts much longer than a rocket engine. It has to be carried into outer space by a regular rocket, because the ions don't push hard enough for it to escape the Earth's gravity, but after it gets to outer space it can travel a very long way. An ion thruster needs electricity to run, so the spacecraft has to also carry solar panels or a nuclear reactor.

In 2011 the NASA space probe called Dawn used an ion thruster to get to the asteroid Vesta. In 2015 the thruster brought it to the dwarf planet Ceres.