The atmosphere is the layer of gases around the Earth. It is held in place by Earth's gravity.There are total 5 layers of atmosphere, named stratosphere, troposphere, mesosphere, thermosphere, and exosphere. It is made up mainly of nitrogen (78.1%). It also has plentiful oxygen (20.9%) and small amounts of argon (0.9%), carbon dioxide (~ 0.035%), water vapor, and other gases. The atmosphere protects life on Earth by absorbing (taking) ultraviolet rays from the sun. It makes our days cooler and our nights warmer.

Originally, the Earth's atmosphere had almost no free oxygen. 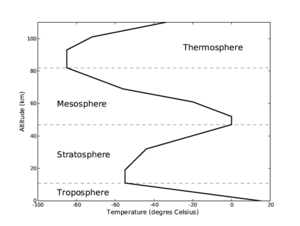