Acceleration due to gravity

Why heavier objects do not fall faster than lighter objects

Isaac Newton worked out that resultant force equals mass times acceleration, or in symbols, [math] F = ma[/math]. This can be re-arranged to give [math]a = \frac{F}{m}\ [/math]. The bigger the mass of the falling object, the greater the force of gravitational attraction pulling it towards Earth. In the equation above, this is [math]F[/math]. However, the amount of times the force gets bigger or smaller is equal to the number of times the mass gets bigger or smaller, having the ratio remain constant. In every situation, the [math] \frac{F}{m}\ [/math] cancels down to the uniform acceleration of around 9.8 m/s2. This means that, regardless of their mass, all freely falling objects accelerate at the same rate. 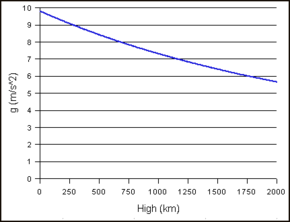 Change in gravitational acceleration with the height of an object

Using the constant [math]k[/math], we can work out gravitational acceleration at a certain altitude.

Gravitational acceleration at the Kármán line, the boundary between Earth's atmosphere and outer space which lies at an altitude of 100 km (62 mi), is only about 3% lower than at sea level.