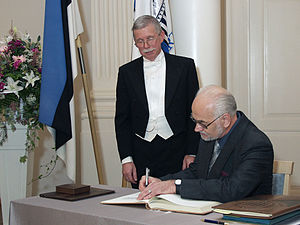 Jaak Panksepp (the one writing) at the promotion of honorary doctors at the University of Tartu (December 2004).

Jaak Panksepp (June 5, 1943 – April 17, 2017) was an Estonian-born American[1] neuroscientist, a psychobiologist, the Baily Endowed Chair of Animal Well-Being Science at Washington State University's College of Veterinary Medicine, and Emeritus Professor of the Department of Psychology at Bowling Green State University. He was born in Tartu, Estonia.

Panksepp created the term 'affective neuroscience',[2] the name for the field that studies the neural mechanisms of emotion. He was known in the popular press for his research on laughter in non-human animals.[3][4]