Location of the Jack Hills in Australia 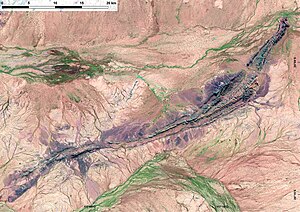 The Jack Hills are a range of hills in Western Australia. They include the oldest material of terrestrial origin found on Earth. These are zircons which formed about 4.4 billion years ago (bya).[1] The oldest zircon with the most consistent date is closer to 4.35 bya.[2]

This zircon is part of a population of zircons in the metamorphosed conglomerate. They were deposited about 3.060 bya, which is the age of the youngest detrital zircon in the rock.

The zircons are used in research on the conditions on Earth in the Hadean eon.

We have samples of rock from the Moon which are older than these zircons. The "Genesis Rock", got from the Moon by astronauts in the Apollo 15 mission, has been dated at 4.46 billion years.[3] This is one of the oldest known rocks on Earth, though it originated on the Moon. During Apollo 16, older rocks were brought back.

The Allan Hills 84001 meteorite was blasted off from Mars by meteorite impact about 4.5 bya, and crystallised 4.091 bya. It arrived on Earth about 13,000 years ago. These figures were got by a number of radiometric dating techniques.[4][5]