KidzSearch Safe Wikipedia for Kids.
Jump to: navigation, search
General Sir James Abbott (12 March 1807 – 6 October 1896) was a British army officer in colonial India. He became famous in the northwest frontier region of India in the middle part of the 19th century (today this is the Khyber Pakhtunkhwa province of Pakistan). He was one of Henry Lawrence's 'advisers' to the Sikhs, after the First Anglo-Sikh War (1846),[1] and then became the first deputy commissioner of Hazara (1849 - 1853). 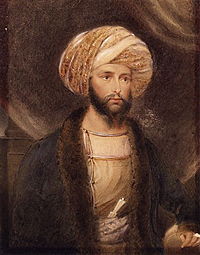 James Abbott in Afghan dress, portrait by B. Baldwin, 1841

As part of the Treaty of Lahore signed after the defeat of the Sikhs in the First Anglo-Sikh War, Hazara and Kashmir were going to be transferred to Gulab Singh, Hazara however stayed under the Lahore government and governed by James Abbott.[2] The Pakistani city of Abbottabad was founded by him in January 1853 and is named after him.[1]

James Abbott was the brother of Augustus Abbott and Frederick Abbott, who also served as officers in the forces of the East India Company. His picture was created by the artist B. Baldwin, this picture is located in the National Portrait Gallery in London, though it is not currently on display.[3]