Khyber Pakhtunkhwa (Urdu: صوبہ سرحد پاکستان‎) is a province in northwest Pakistan. The capital is Peshawar and it has a population of 14 million people and an area of 28,773 mi² or (74,521 km²). The province was created in 1901 during British rule when it was separated from a Punjab province of the British India Empire.[source?] A referendum was held in the North West Frontier Province on 2 July 1947. The majority of voters wanted to join with Pakistan, with only a very small number voting to join with India. The province became a part of Pakistan, because of this referendum.

For over a hundred years from its founding as a province of British India in 1901, it was known as the North-West Frontier Province. Afghania is another name long considered as a replacement for North-West Frontier Province.[2][3] It was proposed first by the founding leaders of the Muslim League in 1933[3] and was at least partly chosen to represent the first "a" in "Pakistan. In 2010 it was renamed.

Pakhtunkhwa (and the other transliteration variants) is derived from Pakhtun and khwa, the former refers to the ethnic group and the latter literally means "heart". 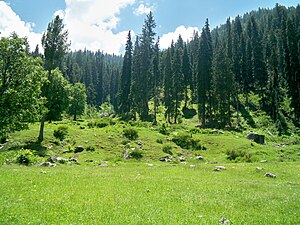 On the way to Shahi Bagh Lake, Swat valley

Khyber Pakhtunkhwa sits primarily on the Iranian plateau and comprises the junction where the slopes of the Hindu Kush mountains on the Eurasian plate give way to the Indus-watered hills approaching South-central Asia. This situation has led to seismic activity in the past.[4] The famous Khyber Pass links the province to Afghanistan, while the Kohalla Bridge in Circle Bakote Abbottabad is a major crossing point over the Jhelum River in the east.

The province has an area of 28,773 mi² or (74,521 km²) — comparable in size to New England in North America.[5] Peshawar, Mardan, Kohat, Abbottabad, Dera Ismail Khan and Hangu are the main cities. It borders on Afghanistan.

The region varies in topography from dry rocky areas in the south to forests and green plains in the north. The climate can be extreme with intensely hot summers to freezing cold winters. Despite these extremes in weather, agriculture remains important and viable in the area.

The hilly terrain of Kalam, Upper Dir, Swat, Naran and Kaghan is renowned for its beauty and attracts a great many tourists from neighboring regions and from around the world. Swat is popular among tourists as the "Switzerland of South Asia" as there are many landscape similarities between it and the mountainous terrain of Switzerland.

The northern zone is cold and snowy in winters with heavy rainfall and pleasant summers with the exception of Peshawar basin, which is hot in summer and cold in winter. It has moderate rainfall. The southern zone is arid with hot summers and relatively cold winters and scanty rainfall.

Its snow-capped peaks and lush green valleys of unusual beauty have enormous potential for tourism.

According to the 1998 census, the population of the province was approximately 17 million,[6] of whom 52% are males and 48% are females. The density of population is 187 per km² and the intercensal change of population is of about 30%.

In KPK about 67% of the people are pashtuns and they speak pashto language as regional language. Other widely spoken languages are Erina, kalami, khowar, kohistani, yidgha. Urdu is understood by majority of the people.

The President of Pakistan appoints a Governor as head of the provincial government of Khyber Pakhtunkhwa. There is a directly-elected Provincial Assembly, which has 124 elected members (including 22 seats reserved for women and 3 seats for non-Muslims). The Provincial Assembly elects a Chief Minister to act as the chief executive of the province, assisted by a cabinet of ministers.