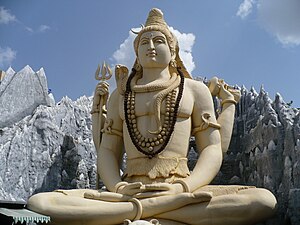 Shiva is one of the three main gods in Hinduism. Shiva is know as the destroyer god because he removes all evil from the world. His wife is the goddess Parvati. According to Hindu legend, he has a blue neck because he swallowed a poison in order to save the universe. He has three eyes, the third eye is on his forehead. Shiva is one-third of the Hindu trinity including Brahma and Vishnu. Lord Shiva lives in the Mount Kailash with his two sons Kartikeya and Ganesha who is known as the God of love. There is a statue of Shiva in Bangalore which is a great tourist attraction. (Ganesh).