Lord Maha Vishnu is the Supreme Godhead (Para Brahman or Nirguna Brahman). He is called Swayambhu in the Ramayana and Mahabharata. Vishnu is one of the three main gods in Hinduism and the Absolute Supreme being in Vaishnava tradition. Vishnu is one of the Trimurtis in Hinduism.[5] Vishnu is the preserver god, which means he protects the universe from being destroyed and keeps it going, according to this religion, and he has come to earth in nine forms (called avatars) so far, with one yet to come at the end of Kali Yuga to destroy evil. His most famous incarnations are Rama, Krishna, and Narasimha. Vishnu's wife is Lakshmi, the goddess of fortune. Lord Vishnu is usually shown with light blue skin and four arms. The Lord holds a lotus (Padma), the Indestructible Mace Of Lord Vishnu (Kaumodaki), a conch (Shankha) and the Unstoppable Disc Of Lord Vishnu (Sudarshan Chakra) in each of his four hands. He is known to take many guises. But the three main forms of Vishnu are Mahavishnu Karanodakshayi Vishnu (Mahavishnu), Garbhodaksayi Vishnu and Kshirodakashayi Vishnu. The latter two being the expansion of Karanodakshayi Vishnu.

There are 10 Avatars of Vishnu (in the order they appeared): 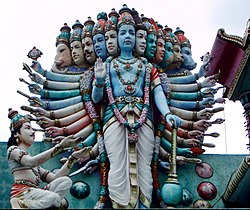 Kodlamane Shree Vishnumurthy Temple : of Serenity and Mystery,[6] is dedicated to Lord Vishnu and is ancient Tirth Kshetra. Visiting such a Shrine away from the crowd is pleasing for the heart. There is no other place like this anywhere in Brahamanda