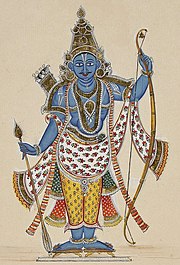 Raam is the Seventh Avatar of Vishnu in Hinduism. He was a king of ancient India. His wife is Sita, who is the Avatar of Lakshmi.

He is the hero of the ancient Hindu epic poem, The Ramayana (from Sanskrit: The Journey of Rama). In this legend, Rama is born in Ayodhya. His father is King Dasharatha. His stepmother has exiled him from the kingdom, and Rama goes to live as an ascetic in the forests. He is also known as Maryada Puroshottam, which means he teaches humanity how to live life without sacrificing the happiness and interest of others. He is the perfect human form of "prabhu" or God. Ram is a popular God and revered across India and Nepal.

He is said to have come to earth again to give Darshan to Sant Shiromani Shree Goswami Tulasidas.

Ram naam or the calling out Ram's name is said to purify one's very soul.

According to legend, Rama and Sita had two sons,luv and kush.