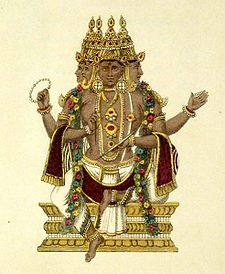 According to Hinduism and Hindu mythology, Brahma is one of the three major gods of Hindus. Brahma is said to be the creator of the whole universe. The other two gods are Vishnu, the preserver, and Shiva, the destroyer, all three of which make up the Trimurti.

Help Improve This Page: Please contact us to become an approved KidzSearch editor and provide your credentials. Provide feedback on this article in our Brahma Forum