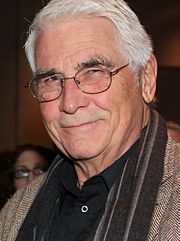 James Brolin (born Craig Kenneth Bruderlin, July 18, 1940) is an American movie, television, voice, stage actor, movie producer, and movie director. He is known for his roles in Love, Wedding, Marriage, Westworld, Capricorn One, The Car, and in The Amityville Horror. He has won a Golden Globe Award and an Emmy Award.

Help Improve This Page: Please contact us to become an approved KidzSearch editor and provide your credentials. Provide feedback on this article in our James Brolin Forum