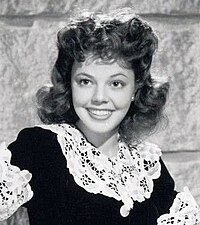 Porter was active throughout the 1940s. She appeared in almost 30 movies with MGM stars like Esther Williams, Mickey Rooney and the comedy duo Abbott & Costello. In the 1950s, Porter appeared mainly in television series such as The Red Skelton Show, Sea Hunt, and 77 Sunset Strip. She retired from acting in 1961.

Porter died in Canoga Park, California of natural causes, at the age of 95.[2]

Help Improve This Page: Please contact us to become an approved KidzSearch editor and provide your credentials. Provide feedback on this article in our Jean Porter Forum