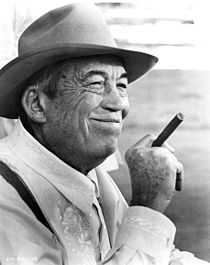 During his 46-year career, Huston was nominated for 15 Academy Awards, for which he won only two. He was the father of actress Anjelica Huston and actor Danny Huston.

Huston died August 28, 1987 in Middletown, Rhode Island from pneumonia caused by his emphysema, he was 81 years old.[1]