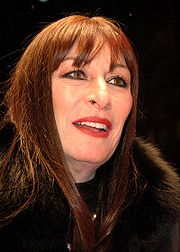 Anjelica Huston (born July 8, 1951) is an American stage, television, voice, movie actress, and movie director. Huston is mostly known for her role as Morticia Addams in the movie The Addams Family and its sequel Addams Family Values. She is the daughter of director John Huston. She won a Golden Globe Award in 2004.