John Joseph "Jack" Nicholson (born April 22, 1937[1]) is an American actor, director, producer and writer. He started out as a writer and part-time actor. He became a star in 1969 when he had a small part in the movie Easy Rider. He has won three Oscars, for As Good as it Gets, One Flew Over the Cuckoo's Nest, and Terms of Endearment. He is one of the fans for Los Angeles Lakers. Nicholson is one of only two actors who have been nominated for an Academy Award for acting in every decade from the 1960s to 2000s; the other is Michael Caine. Nicholson received the Cecil B. DeMille Award in 1999. He has won seven Golden Globe Awards. He received a Kennedy Center Honor in 2001. Nicholson dropped out from the remake movie Toni Erdmann.[2]

Nicholson has been linked to many actresses and models, including Michelle Phillips, Bebe Buell and Lara Flynn Boyle. He had a intimate relationship with Anjelica Huston from 1973 to 1989. The relationship ended when the media reported Rebecca Broussard was pregnant with their child. Nicholson and Broussard had two children together, Lorraine and Raymond. Nicholson's other children are Jennifer (born with Sandra Knight) and Honey Hollman (born with Winnie Hollman). Susan Anspach says that her son, Caleb Goddard, was fathered by Nicholson. He is not sure that he is the father.[3][4] Nicholson describes himself as a "lifelong Irish Democrat",[5] and is highly against abortion. He is Roman Catholic. In 2020, Nicholson endorsed Bernie Sanders's second presidential campaign for the 2020 nomination.[6] 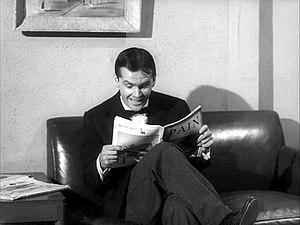 Nicholson as Wilbur Force in The Little Shop of Horrors (1960) 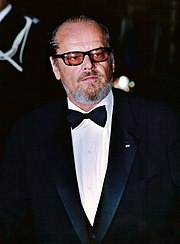 Nicholson at the 2002 Cannes Film Festival