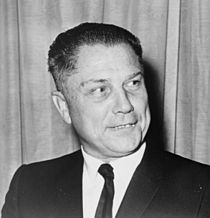 James Riddle "Jimmy" Hoffa (February 14, 1913 – disappeared July 30, 1975) was an American labor union leader who vanished, aged 62. He is widely believed to have been murdered.

Hoffa became involved with organized crime. Hoffa was taken to jail in 1967, and sentenced to 13 years. President of the United States Richard Nixon pardoned Hoffa in 1971, but didn't let him join any labor events until 1980.

Hoffa was born in Brazil, Indiana, on February 14, 1913. He was married to Josephine Poszywak from 1936 until his disappearance in 1975. They had two children.

Hoffa was last seen in late July 1975, outside the Machus Red Fox, a suburban Detroit restaurant.[1] His disappearance gave rise to many theories as to what happened to him and where his body was hidden.

In January 2013, reputed gangster Tony Zerilli offered that Hoffa was originally buried in a shallow grave, with the plan that Hoffa's remains would later be moved to a second location. Zerilli contends, however, that these plans were abandoned, and Hoffa's remains lay in a field in northern Oakland County, not far from the restaurant at which he was last seen. Zerilli, however, denied any responsibility or association with Hoffa's disappearance. [2]

On June 17, 2013, the Zerilli information led to a property in Oakland Township in northern Oakland county owned by Detroit mob boss Jack Tocco.[3] After three days the FBI called off the dig. No human remains were found and the case remains open.[4]