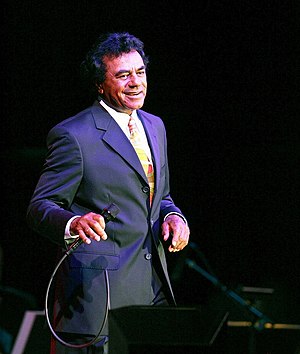 John Royce "Johnny" Mathis (born on September 30, 1935) is an American singer and songwriter. He has had many hit songs.[1] Mathis was born in Gilmer, Texas and raised in San Francisco, California. He is openly gay.[2]

In 1956 Mathis' first album Johnny Mathis was released. Mathis' first single "Wonderful! Wonderful!" was released in 1957. One of his well-known hit songs is "Misty". This song was written in 1954 by a jazz pianist Erroll Garner. Johnny Burke wrote a lyrics later for this melody and became popular as Mathis recorded this song and made public on September 1, 1959.[3] Nowadays "Misty" is considered as one of American standards.[4]