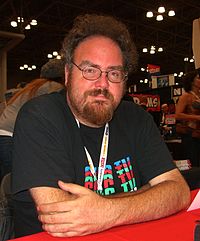 Jonathan D. "Jon" Schnepp (May 16, 1967 – July 19, 2018) was an American producer, director, voice actor, editor, writer, cartoonist, animator, and cinematographer. His documentary movie The Death of "Superman Lives": What Happened? (2015) was one of his best works. He regularly made appearances on Collider Movie Talk and Collider Nightmares, and hosted Collider Heroes each week.