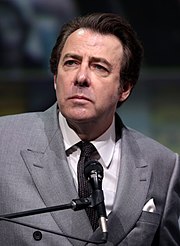 Ross was born in St Pancras, London and raised in Leytonstone, London. His mother is Martha Ross. Paul Ross, Simon Ross and Miles Ross are his brothers.

Ross has worked a lot on the BBC. On the BBC One television channel, Ross presented The Film Programme from 1997 and his own talk show, Friday Night with Jonathan Ross from 2001. He presented a radio show on BBC Radio 2 beginning in 1999. Ross decided to stop presenting all three shows and leave the BBC in 2010. He began presenting a new talk show, The Jonathan Ross Show on ITV1 on 3 September 2011.

Ross is known for his difficulty in pronouncing the letter "r", which sounds more like the sound of a "w" in his speech. Ross was first on television in 1970 in an advert for Kellogg's Rice Krispies.

Ross married Jane Goldman in 1988. The couple have two daughters and a son.