Etruria Hall, the family home in Stoke-on-Trent, is now part of a four-star hotel

Horse Frightened by a Lion by Wedgwood and Thomas Bentley, after George Stubbs, 1780. It shows Wedgwood's signature blue & white porcelain 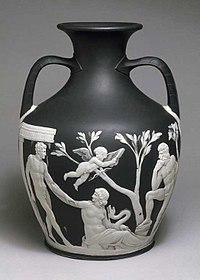 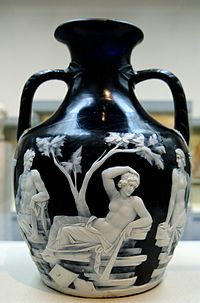 Josiah Wedgwood (12 July 1730 – 3 January 1795, born in Burslem, Stoke-on-Trent) was an English potter, who became famous for the industrialisation of pottery. He was the grandfather of both Charles Darwin and Emma Darwin, Charles' wife.

Wedgwood was the first to use modern marketing: direct mail, money-back guarantees, travelling salesmen, self-service, free delivery, buy one get one free, and illustrated catalogues.[1]

When he was a child, Josiah had smallpox, but he survived (did not die). The smallpox injured his knee, so he could not easily work as a potter. Instead, he worked hard to design pottery. Working as an apprentice, Wedgwood learned many techniques for making pottery. He used his skills to make one of the first pottery factories, Ivy Works, in Burslem, now part of Stoke-on-Trent.

Wedgwood was very interested in science and technology, and used new ideas to make good quality pottery. He became famous for making pottery for royalty, and became very rich. He spent money on civic works, things that would help businessmen and people in the city, for example canals. He became friends with Erasmus Darwin, an important scientist and inventor. In 1780, Wedgwood and Darwin became business partners. Wedgwood's son married Darwin's daughter, who gave birth to Charles Darwin. Wedgwood and Darwin were also members of the 'Lunar Society', a group of important scientists, philosophers and businessmen.

By 1763, he was receiving orders from the highest levels of the British nobility, including Queen Charlotte. Wedgwood convinced her to let him name the line of pottery she had purchased "Queen's Ware", and trumpeted the royal association in his paperwork and stationery. In 1773, Empress Catherine of Russia ordered the Green Frog Service from Wedgwood; it can still be seen in the Hermitage Museum.[2] An even earlier commission from Catherine was the Husk Service (1770), now on exhibit in Peterhof.

In the latter part of his life, Wedgwood's obsession was to duplicate the Portland Vase, a dark blue and white glass vase from the first century BC. For three years he worked on the project, eventually producing what he considered a satisfactory copy in 1789. 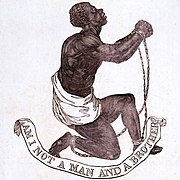