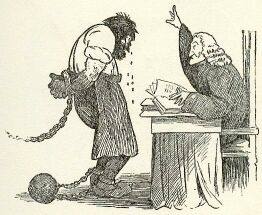 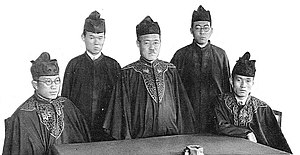 Japanese judges in the 1930s

A judge is a person who is in control of a court of law.

The way to become a judge depends on each country. In some countries, judges must work with the law (often as a lawyer) for a number of years before they can "sit as a judge" in a courthouse. Judges are supposed to conduct the trial in an open courtroom and impartially.

Juries are used in many English speaking countries, but not for all cases. The modern jury trial first developed in mid-12th century England during the reign of Henry II.[1] Today, the details differ between one country and another.

If there is a jury, the judge has the job of making sure the person taken to court is treated in a fair way. Some courts will have more than one judge. For important decisions about the laws of a country, countries may have a supreme court or high court with many (nine or more) judges in it. In the United States, judges on a supreme court are called justices and are led by a Chief Justice.

In many countries, judges wear special clothes while being in court. Often this is a black robe or cloak. Supreme or High Court judges often wear a red cloak. Judges in some countries also wear a special long wig. They also used to put a piece of black material on their head when they sentenced a person to die.