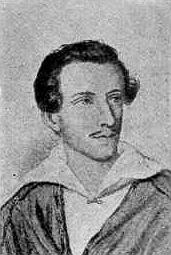 Juliusz Slowacki (September 3, 1809 - April 3, 1849) was a Polish poet. He was born on August 23, 1809, according to the Old Calendar. September 4 is often given as his birthday but the calculation between days was wrong by one day. Slowacki is thought of as being as good a poet as most of the famous Polish writers. These include Mickiewicz, Norwid, Reymont (author of Chlopi), Wybicki, Krasinski and Sienkiewicz. He is buried in Wawel Cathedral in Krakow. This is the same crypt as Mickiewicz. He is considred third most important Polish poet.

Slowacki was first buried on April 5 1849 in Paris's famous Montmartre cemetery. Because he was not popular at the time, only about 30 people went to his funeral. In 1927, General Joseph Pilsudski ordered his body be dug up. It was taken back to Poland and honorably reburied on June 28 1927 in Krakow in the famous Wawel crypt for Polish nobles. He was buried with full military honors as a Polish hero. Pilsudski said: "Time to forget Slowacki is over, as long as there is Polish language, Slowacki will live on forever!"