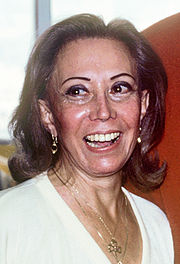 June Foray (September 18, 1917 – July 26, 2017) was an American television, stage, radio, movie, and voice actress. She was mostly known for making the voice of Rocky the Flying Squirrel and Granny in all of the Looney Tunes shows or movies.

Foray has also made the voice of Cindy Lou Who, Jokey Smurf, Lucifer, and Witch Hazel. She received a Daytime Emmy Award and an Annie Award. She has a star on the Hollywood Walk of Fame for her voice work.

Foray was born in Springfield, Massachusetts on September 18, 1917. She was educated at the Classical High School. She was married to Hobart Donovan from 1954 until his death in 1976.[1] They had no children.