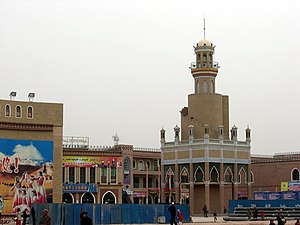 A minaret in Kashgar close to Id Kah mosque

Kashgar or Kashi is an oasis county-level city with about 350,000 residents in the far west of the People's Republic of China, near the border with Tajikistan and Kyrgyzstan. Kashgar is the administrative centre of Kashgar Prefecture of the Xinjiang Uyghur Autonomous Region which has a population of approximately 4 million.[1] The city's urban area covers 15 km2 (5.8 sq mi), though its administrative area extends for 555 km2 (214 sq mi).

Kashgar was the meeting point for the southern and northern ancient Silk Routes for 2000 years because of its situation. The Taklamakan Desert is to the east of the city while westwards are the high mountains of Pamir so camels must be exchanged for yaks (or vice versa). Kashgar remains very much a predominantly Uighur city; its market called Sunday Bazaar [2] is resorted to by merchants from nearby countries such as Kazakhstan, Tadjikistan, and Kirghizistan and is reputed the largest in Central Asia.