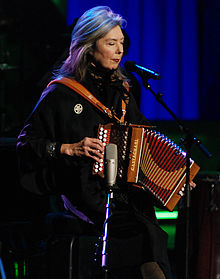 Kate McGarrigle ( February 6, 1946, in Montreal, Canada - January 18, 2010) was a Canadian singer-songwriter famous for her emotional songs written in the folk style.[1] With her sister Anna McGarrigle, she had success in the 1970's where they were well known for their harmony singing.[1] Some of the McGarrigles songs became hits for singers such as Linda Ronstadt and Maria Muldaur.[1] Kate married singer Loudon Wainwright III and had two children, singers Martha Wainwright and Rufus Wainwright.[1]