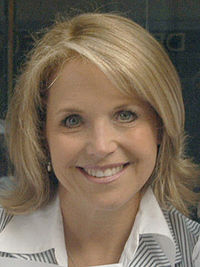 Katherine "Katie" Anne Couric (born January 7, 1957) was a co-host of the top-rated Today show, broadcast live on NBC affiliates, from 1991 until late 2006, earning nearly $14 million each year for the last 4 years of her contract.

Couric was born in Arlington, Virginia. She was hired by CBS in late 2006 to anchor the evening news, which operated with temporary anchors after Dan Rather's departure. Ratings have been disappointly low despite the initial fanfare and introduction of new theme music at the beginning of each show.

Couric is active in charities, especially related to colon cancer, after the death of her husband (to colon cancer) in 1998. Couric received a colonoscopy on live television in March 2000. She also released pictures of her mammogram on television.