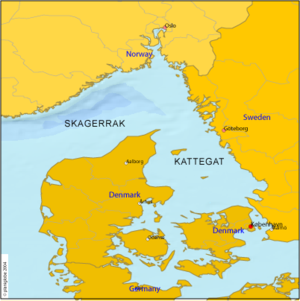 Image showing the Skagerrak and the Kattegat seas

Kattegat is a sea in the northern part of Europe between the Danish peninsula Jutland, the Danish island Zealand, and the western coast of Sweden.

To the north-west is Skagerrak. Kattegat is connected to the Baltic Sea through the Danish Straits and Belts.

The sea is shallow, and life conditions are threatened by loss of oxygen in the water. The oxygen loss is caused by pollution. The pollution originates from farming. A century ago, the sea was very rich in cod, herring, and salmon, which were important sources of food in the countries around the sea.