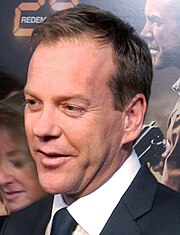 He was born in London, England in 1966 to Canadian actor Donald Sutherland and his wife Shirley Douglas, an actress and daughter of Canadian statesman Tommy Douglas. He also has a twin sister, named Rachel, who looks similar to him. He grew up in London, Corona, California and Toronto, Ontario.

He is also in the Fox drama, Touch as the role of Martin Bohm.