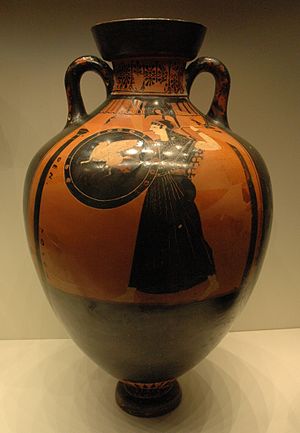 Athena on an amphora

The Kleophrades Painter was a red-figure Athenian vase painter. His real name is unknown. His name is taken from a potter's signature on a vase. He was active from about 510–470 BC. His work is considered some of the finest of the red figure style. He was probably the pupil of Euthymides, one of the red-figure Pioneers. His work is identified by its stylistic traits. He was very productive. More than 100 vases of his work have survived. He worked in both black- and red- figure styles and techniques. He was conservative, often using old-fashioned techniques. His subjects were traditional but with a emphasis on the Trojan War. He preferred painting large vessels such as amphores.