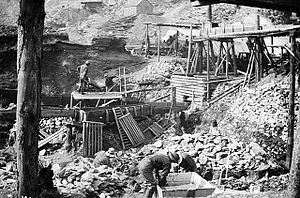 A mining camp in the Klondike region

The Klondike gold rush reached its peak in 1898, attracting tens of thousands in the harshest conditions in North America.t was a very dangerous journey. in some places, such as the White Pass, one in thousands of horses rarely survived as it collapsed under the load. (edited by F.Louise S.)

The Klondike Gold Rush happened in the 1890s when many people went to the Klondike region of the Yukon, in Canada. They hoped to find gold there and become rich. Many of these prospectors came from the United States. Gold was first found in Klondike in a creek called Rabbit Creek. Prospectors named the creek "Bonanza Creek" because of the gold (bonanza means a lucky source of wealth).

The city that probably profited most from the Klondike Gold Rush was Dawson City, Yukon in Canada. Four million dollars worth of gold was found there.

However, not that much gold was found in Klondike overall.