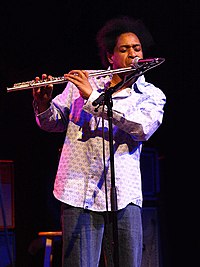 Kofi Burbridge (September 22, 1961 – February 15, 2019) was an American keyboardist and flautist. He was a member of the Grammy Award-winning blues rock group Tedeschi Trucks Band. Burbridge was born in the Bronx, New York.[1] He was also the brother of bass player Oteil Burbridge.