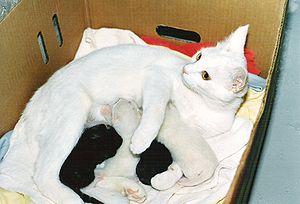 Lactation describes the secretion of milk from the breasts when a mother feeds her young. It occurs with almost almost all female mammals after the birth of their young. In humans the process is also called breastfeeding or nursing.

In most species, milk comes out of the mother's nipples. The platypus (a non-placental or monotreme mammal) releases milk through ducts in its abdomen. In only one species of mammal, the Dayak fruit bat, is milk production a normal male function.

The evolution of milk production made use of a feature which was present before modern mammals.[1][2][3] The cells which produce milk were developed from the apocrine glands in the skin:

"The synapsid branch of the amniote tree that separated from other taxa in the Pennsylvanian (>310 million years ago) evolved a glandular rather than scaled integument".[2]

Meaning: since the skin of synapsids had glands in it, the development of milk production was possible.

Apart from food nutrients, mothers' milk contains a range of antibodies which protect the baby until it develops its own immune system. When born, a baby has IgG antibodies from across the mother's placenta. Its own immunoglobulin production takes about six months to develop after birth, so meantime the mother's milk supplies IgA as a stop-gap protection.[4]