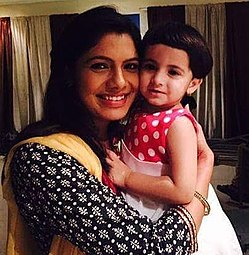 A mother is a female parent. A mother gives birth to babies after pregnancy. Pregnancy is usually nine months. If a woman over the stage of puberty raises an adopted or biological child, then she is a mother as well. Adopted children are also part of that person's family. Also see Maternal insult.

After the birth of a baby, breastfeeding is an important part of taking care of the baby.

Other names for "mother"