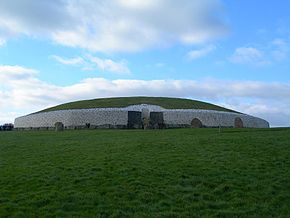 Newgrange is one of the most important prehistoric megalithic sites in Europe and is also older than Stonehenge and the great pyramids of Giza.

World Heritage Sites in Ireland are places that are in the UNESCO World Heritage Programme. These are places of outstanding cultural or natural importance to the common heritage of mankind.

Located in County Meath, the site is several Neolithic chamber tombs, standing stones, henges and other prehistoric enclosures. Some date to as early as 35th century BC - 32nd century BC. The site came before the Egyptian pyramids. It was built with a knowledge of science and astronomy. This is most evident in the passage grave of Newgrange. The site is often called the "Bend of the Boyne". Some people think this is what Brú na Bóinne means, but it does not. It means "Palace of the Boyne". It was made a World Heritage Site in 1993.

Off the coast of west County Kerry, Skellig Michael was probably founded in the 7th century. For 600 years the island was a centre of monastic life for Irish Christian monks. The Gaelic monastery is almost at the top of the 230-metre-high rock. It became a UNESCO World Heritage Site in 1996. It is one of Europe's better known but hardest to reach monasteries.