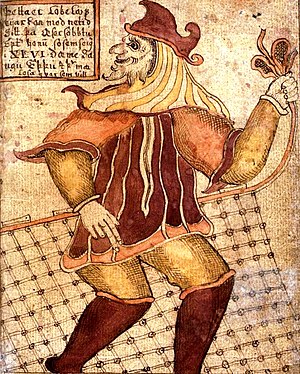 In Norse mythology, Loki (Anglicized /ˈloʊki/) is a god or jötunn. The son of Laufey and the [male] jötunn Fárbauti (Old Norse: “cruel striker”), Loki is often referred to as the god of trickery and mischief, and is Odin's blood brother. Known as the “Father of Monsters,” Loki has sired a variety of creatures; these include the monstrous wolf Fenrir, and the Midgard Serpent, Jörmungandr, both of whom were born to him by the giantess (jötunn) Angrboða. He is married to the goddess Sigyn, by whom he is the father of Narfi and/or Nari. By the stallion Svaðilfari, Loki is the father, giving birth in the form of a mare (female horse), of the eight-legged horse Sleipnir.

Loki has a complicated relationship with the Æsir, oftentimes assisting them or hindering them in bringing their goals to fruition. And is also a friend of Thor