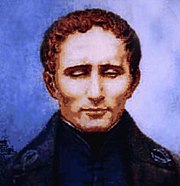 A portrait of Louis Braille

Louis Braille (4 January 1809 - 6 January 1852) was a French inventor. He was born in Coupvray.[1] He invented the script braille system, which helps blind people to read. Braille is read by passing one's fingers over characters made up of an arrangement of one to six embossed points. It has been adapted to almost every known language.

Braille was the child of a leather maker. He was the youngest of four children. He had three older siblings, two sisters and a brother. He became blind at the age of three. He accidentally stuck an stitching awl into one eye. There were no antibiotics and soon his injured eye was infected. It spread to his other eye and soon, he became blind in both eyes. He went to the Royal Institute of Blind Youth at the age of ten. Braille was a good student, especially when it came to science and music. Later he became a church organist. He was also a teacher at the Institute of Blind Youth. Braille died in Paris at the age of 43 of tuberculosis.