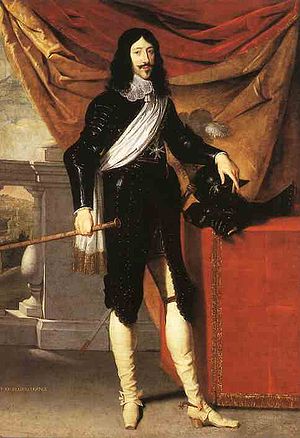 Louis XIII of France (27 September 1601 – 14 May 1643) was King of France from 1610 to 1643. He was the son of Henry IV and Marie de Medici.[1] He lived during the time of the Thirty Years War and had to deal with many rebellions. He was proud of his country, and tried to encourage French artists to stay in France instead of going off to Italy. He did this by giving them work in the Louvre.

Although he was married people thought that he would never produce an heir. Then, after 23 years of marriage, his wife Anne gave birth to a baby boy. He was to become King Louis XIV of France.

His other son was Philippe of France, Duke of Orléans