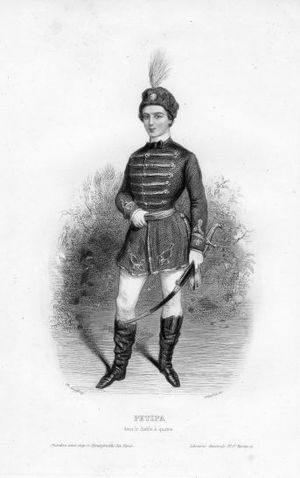 Joseph Lucien Petipa (22 December 1815 — 7 July 1898) was a French ballet dancer and choreographer. He was born in Marseille, France to choreographer and dancer Jean Petipa. He was the brother of Ballet Master of the Russian Imperial Ballet, Marius Petipa. Lucien made his Paris debut on 10 June 1840 in La Sylphide with Fanny Elssler. He partnered Carlotta Grisi in the first Giselle, the first Paquita, and many other ballets of the 1840s. He choreographed his first full-length ballet, Sacountala, in 1858. He choreographed a few other ballets, but devoted himself mostly to developing dancers. Between 1860–68, he was Ballet Master at the Paris Opéra Ballet, and later Professor of Mime at the Conservatory. In 1882, he produced his most popular and most successful ballet Namouna. He died in Versailles.