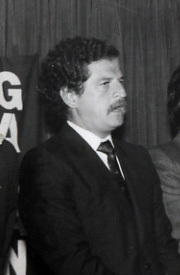 Luis Carlos Galán Sarmiento (29 September 1943 – 18 August 1989) was a Colombian liberal politician and journalist. He was born in Bucaramanga, Santander, Colombia. Galán ran for the Presidency of Colombia two times. Galan ran under the Liberal party in 1989 and sought the nomination for the 1990 presidential election.

Galán, a critic of cartels and Pablo Escobar, was shot to death by hitmen hired by the drug cartels during a campaign rally in the town of Soacha, Cundinamarca on 18 August 1989 at the age of 45.