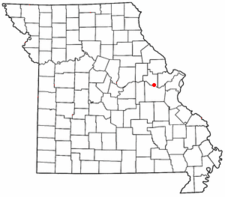 Location of Marthasville in Missouri

Marthasville is a city in Warren County, Missouri, United States. The population was 1,136 at the 2010 census.[1] The Katy Trail, a 225-mile long bike path, passes through Marthasville. Because of the many wineries from here east to Defiance, Marthasville is considered to mark one end of the "Missouri Rhineland". 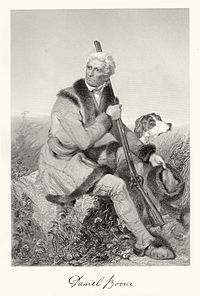 Daniel Boone and his family came to the area later known as Marthasville in 1799.[2] At the time there was only a French trading post there called LaCharette. Flanders Callaway and his wife Jemima Boone (Daniel and Rebecca's daughter), built a house just outside the present city limits. In 1804 the Lewis and Clark Expedition camped here near LaCharette. On their return 20 September 1806 they were greeted by the area residents, the first civilization they had seen since leaving.[2] Rebecca Boone died in 1813 at Jemima’s home and was the first burial in the family cemetery of the Bryans and Boones (now Marthasville cemetery).[2]

In 1817 the city of Marthasville was established by Dr. John Young of Kentucky. He named it after his wife Martha.[2] A year later Montgomery County was formed with Marthasville being the only town. In 1833 the area became Warren County.

The original graves of Daniel Boone and his wife Rebecca were located there.[3] In 1845, Boone's remains and those of his wife Rebecca were dug up and taken to Kentucky for reburial. Resentment in Missouri about the removal of the bodies grew over the years. A legend was that Boone's remains never left Missouri. A modern forensic anthropologist believes the body removed from Missouri was probably a black slave and not Daniel Boone.[4]

In 1850, during the California Gold Rush, a number of people left Marthasville to find gold. The group was led by one of Daniel Boone's grandsons, M. Jackson Lamme.[2] Others in the group were also descendants of Boone. They settled in California and have many descendants there today.[2]

During the 1800s the area was settled by winemakers and workers from Germany. This part of the Missouri River Valley has become known as the Missouri Rhineland.[6] The wines from this part of Missouri soon gained a worldwide reputation. At the 1851 Vienna World Exposition, Missouri wines took 8 of the 12 gold medals.[6] French winemakers took notice and started importing the Norton/Cynthiana vines into France.[6] But they were infected with a louse called Phylloxera. The louse had no effect on the Missouri rootstock, but in France it destroyed almost all of France's grapes.[6] Two Missourians found a cure for the blight and the French vines were saved.[6]