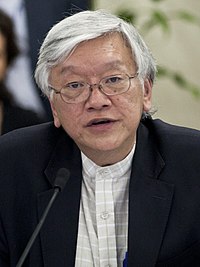 Martin Khor Kok Peng (9 November 1951[1] – 1 April 2020) was a Malaysian journalist and economist. He served as the executive director of the South Centre from 2009 to 2018. South Centre is an intergovernmental organisation of developing countries based in Geneva, Switzerland. He was also director of the Third World Network during his life. Starting in 1978, he was a columnist for The Star. He was born in Penang.