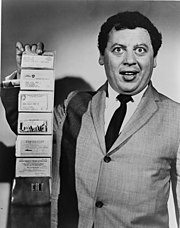 Marty Allen (born Morton David Alpern, March 23, 1922 – February 12, 2018) was an American comedian, actor, activist, and writer. Allen was known for his stand-up comedy jokes in nightclubs in California and in Las Vegas. He also wrote books about his career and support many foundations.

Allen was born in Pittsburgh, Pennsylvania to a Jewish family.[1] He studied at Taylor Allderdice High School and at the University of Southern California. Allen was married to Frenchie Allen until her death in 1976. Then he was married to Katie Blackwell from 1984 until his death in 2018. He had no children.

Allen lived in Las Vegas, Nevada and in Los Angeles, California. He died of problems from pneumonia in Las Vegas on February 12, 2018. He was 95.[2]