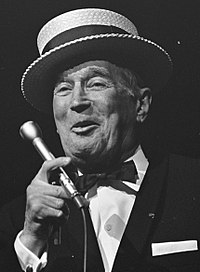 Maurice Auguste Chevalier (September 12, 1888 – January 1, 1972) was a French actor and cabaret singer.[1] He was born in Paris. He was perhaps best known for his songs, including "Louise", "Mimi", "Valentine", and "Thank Heaven for Little Girls" and for his movies, including The Love Parade, The Big Pond, Love Me Tonight and Gigi.

During World War I, Chevalier was a prisoner of war of Germany for two years from 1914 through 1916.

In 1958, Chevalier received an Honorary Academy Award for his works in the movie industry.

In 1970, he made his final work to the movie industry where he sang the title song of the Disney movie The Aristocats.