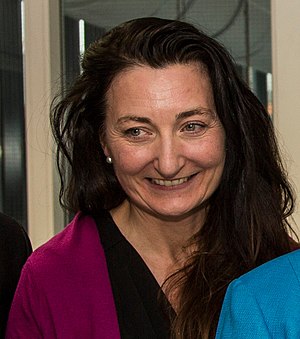 Lua error in package.lua at line 80: module 'Module:Icon/data' not found. May-Britt Moser is a Norwegian psychologist and neuroscientist.

Moser was born on Jan 4, 1962 in Fosnavåg, on a coastal island north of Bergen, Norway. She married Edvard Moser as a student of the University of Oslo in 1985. They had two kids, Isabel and Ailin. The Mosers were directors and coordinators of the Kavil Institute for systems Neuroscience and the Centre for Neural Computation at the Norwegian University of Science and Technology for many years, but they divorced in 2016.[1]

Each earned a PhD in neurobiology in 1995. She used rats as test subjects during her research because their nervous system is very similar to humans. They discovered brain cells that allow animals to move from one place to another. These are called grid cells, and they fire when the rats pass a certain location. Over time, this helped the rats move purposely around the room and navigate their surroundings. The Mosers won a Nobel Prize, an important award. She won this award in 2014 and shared this with John O’Keefe, another neuroscientist.[2] They also won the Louisa Gross Horwitz Prize.[3]