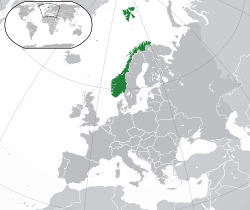 Norway is a country in the north of Europe. It is the western part of the Scandinavian peninsula. The mainland of Norway is surrounded by a coast on the west side and borders Russia, Finland,and Sweden to the east. The coast touches the Oslofjord, Skagerrak, and the North Sea.

The Kingdom of Norway has been independent since 1905. Its head of state is now King Harald V. The national day is May 17, which celebrates Norway's constitution of 1814. The parliament is called Stortinget and its members are elected by the people every 4 years.

About 5 million people live in Norway. The capital, is the city of Oslo. It is also the largest city, with a population of over 530,000. Other major cities are Bergen with 230,000 people and Trondheim with 150,000; both have been the Norwegian capital in earlier years.[7]

Norwegian is the national language. There are two official written versions of Norwegian called Bokmål and Nynorsk. Many Sami individuals are native speakers of one of the Sami languages. Nord-samisk is also an official language in a number of kommuner. ( Each kommune has a mayor. )

Major pieces of Norwegian history include :

King Harald is the first king born in Norway in over 600 years. He has two children; Princess Märtha Louise and Crown Prince Haakon Magnus.

In World War I Norway was neutral and served as a trading nation. Norway tried to stay neutral in World War II, but was occupied by German forces from 9 April 1940 to 8 May 1945.

The Government has Norwegian soldiers working in Afghanistan, together with soldiers from other countries that belong to NATO. The Norwegian parachute regiment known for being very good. The Norwegian head of defense is called Grete Faremo.

The Government collects much money from various sources, and has policies intended to spread this wealth among Norwegians. This spread of wealth, is done both directly and indirectly.

Most people in Norway are ethnic Norwegians. They speak a language that is related to German and early English. Swedish and Danish are so close to Norwegian that most Norwegians understand them. Across Norway, many different dialects are spoken. Norwegians disagree on how to make one correct written language. Therefore, there are two standard languages, Bokmål and Nynorsk. Nynorsk is used in writing in most of the western areas and in the central mountains. Bokmål is written by most people in the rest of the country.

A native population of Norway, the Sami people, has its home in the northern parts of the country. Their language is not at all related to Norwegian. In some parishes in the far north, they make up the majority of people. Many Sami now live outside the Sami homeland, mostly in Oslo and other big cities. Earlier, Sami people were forced to speak Norwegian in school. Now Sami is taught as the first language in school for Sami children, and Norwegian is the first foreign language.

Many immigrants have come to Norway in the last 30–40 years. They mostly live in and around Oslo, and in the other big cities. Many immigrants come from nearby countries, like Sweden, Denmark, Germany, Poland and Russia. There are also many from countries far away, such as Pakistan, Somalia, Iraq and Vietnam.

Traditionally, all Norwegians were Lutherans, a variety of the Protestant faith. Still, more than 80% of Norwegians are Lutherans. Other important faiths include Islam, other Protestant groups and Catholicism.

Among tourists to Norway, more come from Germany than from any other country. There are also many Swedes, Danes, British, Dutch and Italians visiting Norway. The Swedes and Danes often come in winter to go skiing. The others mainly come in summer.

Organizations associated with the Government of Norway

The largest newspapers in Norway are BT Bergens Tidende, VG Verdens Gang, Aftenposten and Dagbladet. BT is the only newspaper that focuses around Bergen. The three last is national and international.

Norwegian culture can be compared to English culture in the way that it is considered a bad thing to show off, as opposed to the US, where this is more acceptable. This is a big aspect of Norwegian culture, and it is related to the philosophy of egalitarianism. Because of this, people will understate things, for example if a Norwegian says something is good or nice, it usually means that it's really great.

Norway also has a rich cultural history, going all the way back to the age of the Vikings, and up to today with several writers and painters. The most famous Norwegian cultural person is probably Henrik Ibsen who wrote several plays and novels, and they often upset people because he challenged popular attitudes such as the role of women. Other famous writers include Knut Hamsun, Jonas Lie, Amalie Skram and more recently, Jens Bjørneboe. Famous painters and musicians includes Evard Munch, Theodor Kittelsen, Ole Bull and Edvard Grieg.

In Norway power is shared between three branches: The justice sector, the government and the parliament. Norway also has a king, Harald 5, but he does not have any real power and acts as a symbol and ambassador. This form of government is called a constitutional monarchy. Elections are held every four years, and the winner of the election is the party or coalition which gets the most votes and seats in the parliament. After the elections are done, the winner(s) work together to find out who should be prime minister, as well as other ministrial posts.

Here is a short summary of the biggest political parties in Norway, from left to right on the political axis:

Currently the Conservative Party and the Progress Party are working together in a coalition government, after getting elected in the 2013 elections.