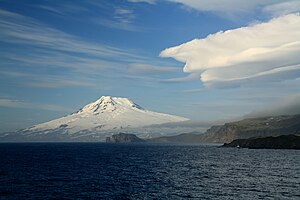 Jan Mayen, with its volcano

Jan Mayen is an island in the Arctic Ocean. It is part of Norway. The island's area is 373 km². A large part of the island is an active volcano, the Beerenberg, which is 2,277m high. Jan Mayen is 600 km north of Iceland, 500 km east of Greenland and 1000 km west of the Norwegian mainland.[1]

There is a radio station and a meteorological station on the island. The staff at these stations are the only people living on the island.

There are many claims and stories about discovery of the island. Some claims and possible discoveries are as early as the beginning of the 6th century. However, the first discovery that is certain was in 1614. The Dutchman Jan Jacobs May van Schellinkhout visited the island then and it is named for him. His first mate made maps of some of the coast.

It is incorrectly assumed that Henry Hudson discovered the island in 1607 and called it Hudson's Tutches or Touches, but there is no evidence for this. Thereafter it was allegedly seen several times by navigators who claimed its discovery and renamed it. Thus, in 1611 or the following year whalers from Hull named it Trinity Island; in 1612 Jean Vrolicq, a French whaler, claimed in 1629 that he had discovered the island and called it Île de Richelieu; and in 1614 English captain John Clarke named it Isabella.

The island has very few residents. The Long Range Navigation (Loran-C) base has a staff of 14 and a weather services station has a staff of four. The staff members of both stations live in Olonkinbyen. The island has no native people living on it, but is given the ISO 3166-1 country code SJ, the Internet country code top-level domain (ccTLD) .no (.sj is allocated but not used) and data code JN. Its amateur radio call sign prefix is JX.