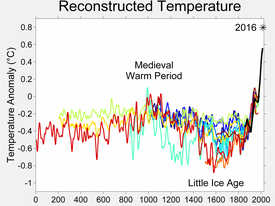 Northern Hemisphere temperature reconstructions for the past 2000 years.

The Medieval Warm Period (MWP) or Medieval Climate Optimum was a time of unusually warm climate in the North Atlantic region. It lasted from about the tenth century to about the fourteenth century. In discussions of global warming this period is often mentioned.

Some refer to the event as the Medieval Climatic Anomaly because this term emphasizes that effects other than temperature were important.[1]