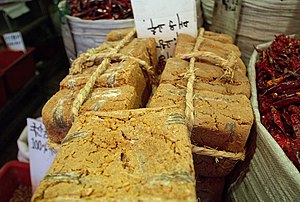 Meju was commonly made in any Korean home in the past. Condiments made with mejus all tasted different because the production of meju was not standardized. As many Koreans now buy Korean traditional condiments instead of making them, it is difficult to find the wide variety of unique tasting condiments made from homemade meju.